Loneliness and Wellbeing in Young and Older Adulthood 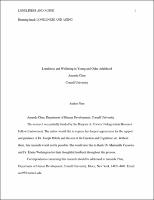