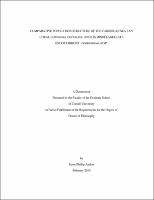 The high productivity of tropical reefs is largely due to the symbiosis between corals and photosynthetic dinoflagellates of the genus Symbiodinium. The resilience of the coral holobiont depends on the genetic diversity and connectivity of both symbiotic partners. However, little is known regarding the population structure of most corals or the symbionts they host. Here, I describe and compare the range-wide population genetic structure of an ecologically dominant Caribbean octocoral, Gorgonia ventalina, and its dinoflagellate symbiont, Symbiodinium B1/184. Twenty polymorphic microsatellite markers (10 for G. ventalina, 10 for Symbiodinium) were used to quantify genetic diversity and differentiation of both symbiotic partners at 35 localities, spanning 3124 km across the Caribbean and Western Atlantic. Both G. ventalina and its symbiont were significantly differentiated among most localities, across distances as short as one kilometer, and estimated migration rates indicate that both symbiotic partners are demographically independent at the regional scale. Patterns of population differentiation for G. ventalina and its Symbiodinium corroborated previously reported biogeographic breaks (e.g. an east/west divide near Puerto Rico) and identified several previously unreported junctures (e.g. the Yucatan Channel and the Florida Strait). Across the range, genetic differentiation was positively correlated with geographic distance for both partners, suggesting that distance is an important isolating mechanism. Differentiation of G. ventalina was also negatively correlated with dispersal probability as estimated by an oceanographic model, indicating that ocean currents are an important means of connectivity. Although the population structures of G. ventalina and its Sybiodinium were similar, they were not completely congruent, indicating that dispersal of these partners is not coupled and that symbiont transmission occurs horizontally. The Symbiodinium haplotype hosted by some G. ventalina colonies changed in response to experimental heat or light stress or reciprocal transplant across depth, suggesting that fine-scale Symbiodinium diversity corresponds with functional diversity, and stress-related mortality was lower among G. ventalina colonies that changed symbionts than those that did not. Taken together, these results indicate that populations of G. ventalina and Symbiodinium are structured independently across relatively short distances, and that some G. ventalina colonies may change their Symbiodinium as a potentially “adaptive” response to stress.