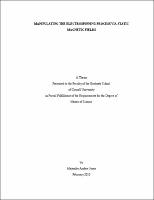 In this thesis we explore the effect of applying a static magnetic field on the development of both the electrified jet and the whipping instability during electrospinning. The effect that viscosity, volumetric flow, conductivity, and electric field play on this process is also reported. Additionally, a preliminary study on the effect that sonication and particle addition have on the rheological properties of polymer solutions is presented. Magnetic nanoparticles of magnetite (Fe3O4) and cobalt ferrite (CoFe2O4) where suspended in poly(ethylene oxide) (PEO) solutions. These particles where dispersed by either sonication or mechanical stirring. Steady state and oscillatory rheological measurements were performed on the different solutions. Chain scission caused by sonication is reported. Additionally, the effect that particle addition has on the entanglement structure of polymer molecules is reported. Solutions were electrospun at volumetric flows of 0.6, 0.9 and 1.2mL/hr. At each volumetric flow the electric field was varied from 20 to 100kV/m in steps of 20kV/m. High speed imaging was employed to study the behavior of the electrified jet at the exit of the capillary. These images showed that both solution viscosity and applied electric are the key parameters on determining the onset of the whipping instability. Scanning Electron Microscopy (SEM) was used to examine the final fiber morphology and size. Again, solution viscosity and electric field were the key parameters in determining the size of the resulting fibers. For each volumetric flow/electric field combination, the electrospinning was carried with and without the presence of a static magnetic field of 3725Ga. High speed imaging was employed to study the effect of the static magnetic field on the electrospinning process. An increase in the electric field required for the electrified jet to initiate was observed when applying the static field. This was attributed to a magnetic force created between the magnet and the polymer/nanoparticles solution which must be overcome by the electric field. Furthermore, at low electric fields an increase in the onset of the whipping instability is reported. This is related to the magnetoviscous effect, which is known to cause an increase in a magnetic fluid’s viscosity. Finally, potential ideas for future work are proposed.