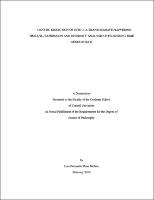 Dth1.1 is a transgressive early flowering QTL that lies on the short-arm of chromosome 1. It was detected from an advanced backcross population of tropical japonica cv. Jefferson and O. rufipogon. Underlining dth1.1 were large number of flowering time genes including OsGI, FT-L8, OsSOC1, OsEMF1 and PNZIP that are components of the photoperiod pathway in rice. Genetic dissection of dth1.1 was carryout through marker assisted selection developing a eight sub-introgression lines (SIL) that carry single or combination of candidate gene introgressions. SILs and controls were evaluated for flowering time under both short- and long-day growing conditions. Under short day lengths, lines with introgressions carrying combinations of linked flowering time genes (GI/SOC1, SOC1/FT-L8, GI/ SOC1/FT-L8 or EMF1/PNZIP) from the late parent, O. rufipogon, flowered earlier than the recurrent parent, Jefferson, while recombinant lines carrying smaller introgressions marked by the presence of GI, SOC1, EMF1 or PNZIP alone no longer flowered early. Under long day length, lines carrying SOC1/FT-L8, SOC1 or PNZIP flowered early, while those carrying GI or EMF1 delayed flowering. A preliminary yield evaluation indicated that the transgressive early flowering observed in several of the SILs was also associated with a measurable and positive effect on yield. To understand underlying mechanism driving the transgressive early flowering observed in early SILs, DNA sequence variation and expression analysis was conducted in four flowering time genes (OsGI, HD1, HD3A and RFT1). Expression levels of HD3A and to a lesser degree RFT1 were predictive of flowering time, with higher HD3A mRNA levels associated with transgressive early flowering. These observations provide support for a flowering-time model whereby increases in the expression of HD3A/RFT1 in chromosome 6 are caused by trans-acting factors located in the dth1.1a QTL region on chromosome 1. In our materials, O. rufipogon alleles across the dth1.1a QTL combined with Jefferson alleles in the HD1-HD3A-RTF1 region on chromosome 6 are necessary to drive transgressive early flowering. The study laid the foundation for further study of photoperiod control transgressive flowering by looking at other HD3A induction pathways independently from HD1 such as, OsSOC1 and EHD1.