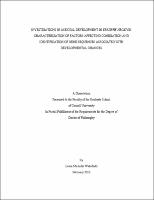 Erysiphe necator is the causal agent of grapevine powdery mildew, one of the most economically significant diseases of grapes worldwide. Spread of the disease is conspicuously enhanced by the ability by the fungus to produce large numbers of asexual spores. In this study, we investigated molecular and environmental cues that are associated with asexual development to gain a greater appreciation for control of this process in E. necator. We found evidence that initiation of conidiation is controlled by a signaling process that is potentially affected by both light and colony density. The signal appears to initiate in the center of colonies and travel outward with the radial growth of the fungus. Colonies placed in complete darkness during the theorized time point for promulgation of this signal failed to initiate conidiation, suggesting a role for light in stimulating asexual development Colony density also showed a significant relationship with timing of sporulation events, with latent period decreasing as initial inoculum density increased. In order to identify genetic sequences which could play a role in asexual development, cDNA-AFLP analysis was used to identify sequences associated with four time points in spore development: vegetative growth (pre-sporulation), conidiophore initiation, full sporulation and ascocarp maturation. Using this method, 231 differentially expressed sequences were identified and sequenced. The majority of these showed no similarity to sequences available in the NCBI database, with the second largest class showing matches to putative fungal sequences of unknown function. Sequences involved in metabolism, signaling, transcription, transport and protein fate were differentially regulated across these stages of development.