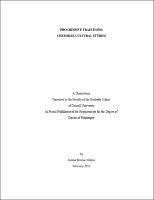 My dissertation intervenes in prevalent debates between nationalists and cosmopolitans that have dominated American Indian literary theory and displaced alternative questions about the empowering potential of local identities. Both positions too often categorize American Indian literature with a reductive dichotomy that opposes traditionalism against assimilation, resulting in the seizing of mechanisms that coordinate change and in the unwarranted archival exclusion of many authors—such as those I discuss—who speak to historical problems with present effects. Seeing past this dialectic requires a fresh look at what precisely is gathered under “assimilation” and “traditionalism”—a reassessment I initiate by arguing that Cherokee representations of dynamic, agentive identities proceed from traditional, adaptive strategies for addressing cultural and historical dilemmas. My project is organized into two sections of two chapters, the first of which introduce principled practices from several scholarly perspectives then applied to primary texts in the subsequent chapters. In the first, I examine an array of traditional religious dispositions and the critical theories that have been advanced to interpret and apply them to Cherokee literature. In the second I take up gendered religious innovations in the memoirs of Catharine Brown, a nineteenth-century Christian convert, and in the science fiction of contemporary novelist Sequoyah Guess, both traditionalists who synthesize identities through pragmatic accommodation and find not erasure but support for Cherokee culture through traditional practices like “gaining knowledge.” The third chapter looks at traditional political structures, providing a cultural context for discussion of Elias Boudinot’s and John Ross’s contentious (and again gendered) rhetoric in chapter four. I argue here that failure to understand the tension over Cherokee Removal to Oklahoma in the (de)structure of political centralization, which vacated the discursive spaces that once forged consensus, has led too many critics to authorize nationalist rhetoric uncritically. I emphasize the major themes of worship and dissent herein because they most often suffer misapplications of the assimilated/traditional dichotomy that simultaneously says so much and so little. I hope my work opens American Indian literary criticism to critical theory, opens theory to American Indians, and most importantly, opens the imaginative possibilities of communal identity.