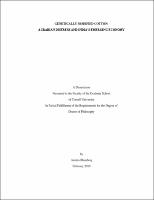 Farmer suicides were first reported in Vidharbha, eastern Maharashtra, a prominent cotton growing region in India in 2005. Similar farm crises that came to light in other cotton regions and rainfed India shocked the sensibilities of the policymakers and public alike. Simultaneously, in 2002, genetically modified (GM) cotton or Bt (Baccilus Thurigenesis) cotton, produced by agro-transnational corporation Monsanto, was introduced and adopted widely in Vidharbha and India's cotton belt. Even before their official release, “illegal” GM seeds were found growing in the central-western state of Gujarat, another prominent cotton growing region in 1998. GM cotton and GM crops are proposed to increase agricultural productivity and usher in a “second Green Revolution” or Gene Revolution in Indian agriculture. The 1960s Green Revolution is widely considered to be an important milestone in changing the face of Indian agriculture as it helped raise agricultural yields, increased agricultural incomes, and saved India from a food crisis. The Gene Revolution is posited to be that imperative sequel to the 1960s Green Revolution that will transform the state of agriculture in rainfed areas. What were the effects of the Green Revolution in Vidharbha and in rainfed areas of India? What impacts does the introduction of GM cotton have on farmers‟ livelihoods in Vidharbha? Will the use of GM cotton lead to positive gains in Vidharbha just as the use of Green Revolution technology did in irrigated areas of the country? In reality, the Green Revolution failed to raise the incomes of farmers in Vidharbha and in rainfed areas of India. By comparing the process of gains that farmers made during the Green Revolution with the Gene Revolution, this dissertation argues that first compared to the winners of the Green Revolution, the economic and ecological capabilities of cotton farmers adopting GM crops in Vidharbha are poor. Second, a supportive ―policy and institutional‖ infrastructure does not exist for the adoption of GM technology in Vidharbha. Such state support allowed the agricultural production process to become safe and profitable only for rich and middle class farmers during the Green Revolution. Third, post trade liberalization, the increasing exposure of the domestic economy to trends in the international trade of raw cotton and textiles, can affect cotton farmers‘ income negatively. As a consequence, GM cotton or the Gene Revolution will be unable to alleviate the crisis condition of cotton farmers. Government intervention is needed to provide cheaper or alternative technologies, such as introducing public sector Bt cotton, Integrated Pest Management or organic farming practices, as well as encouraging food farming and creating opportunities for non-farm employment.