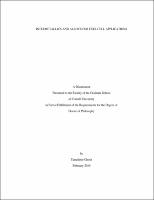 In the search of better catalysts for fuel cells, synthesis of several intermetallic compounds and alloys as nanoparticles has been investigated. In order to obtain these materials as catalysts for fuel cells, chemical co-reduction of precursors in the absence of surfactants with suitable reducing agents has been chosen as the method of synthesis. This work was done in collaboration with combinatorial groups and electrochemists for identifying potential catalysts and electrochemically evaluating them. Starting with PtPb, the scope of this method has been extended to obtain Pt intermetallic compounds and alloys with metals across the periodic table with sodium naphthalide as the reducing agent. The sodium napthalide method has been compared side by side with the sodium borohydride method for metals which can be reduced by both. Other reducing agents have also been explored. PtPb synthesis using sodium naphthalide has been investigated in detail as a case study. Factors affecting room temperature crystallization of PtPb and contributing to low activity observed previously have been identified and addressed by changing the Pt precursor and post reduction work-up. Extending to Pt-Ti, additional factors, which need to be considered for highly reactive metals have been identified. Each of the parameters involved (metal precursor, reducing agent, reducing agent and precursor concentrations, reaction solvent, stirring time, reaction temperature, post reaction washed and annealing) have been analyzed in depth for co-reduction of Pb, Ti and the elements lying in between in reactivity. The observations and inferences in each case have been discussed. Alloy and intermetallic phases of Pt with Ni, Mn, Cr, V, Cd and Hg have been synthesized as nanoparticles. Powder X-ray diffraction, SEM and TEM (scanning and transmission electron microscopy respectively) imaging, surface area measurements (using BET isotherm) and energy dispersive X-ray analysis (EDX) have been performed on all phases mentioned above. In some cases, IR, TGA (thermogravimetric analysis) and MS (mass spectroscopy) studies have also done on these phases in-order to identify contaminants. Several of these phases have shown significant activity for oxidation of formic acid. The electrochemical evaluations have been discussed. Challenges encountered in obtaining these materials clean with the sodium napthalide method have been discussed and are being addressed with other reducing agents like nBuLi. Lastly, in collaboration with the Adzic group in the Brookhaven National Laboratories, activity of PtPb for the oxygen reduction reaction in both nascent and modified form (with monolayer of Pt deposited by underpotential deposition) has been studied. Pd alloys and intermetallic compounds with Pb and Fe have also been synthesized, characterized and similarly evaluated. All these materials were found to active and stable catalysts for the oxygen reduction reaction. Initial experiments were done with Pt3Cr and PtNi.