Hesiod In Ovid: The Metamorphosis Of The Catalogue Of Women 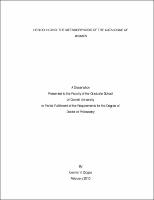 The subject of my dissertation is Ovid's intertextual engagement with the Hesiodic Catalogue of Women (aka the Ehoiai). I examine the Hesiodic character of Ovid’s work, focusing mainly on the Metamorphoses and Heroides 16-17. The Metamorphoses begins with Chaos and moves on to the loves of the gods, reiterating the transition from the Theogony to the Catalogue. Divine passions for beautiful maidens constitute a recurring motif in the Metamorphoses, establishing the importance of the erotic element in Ovid’s hexameter poem and referring to the main topic of the Ehoiai (fr. 1.1-5 M-W). The ﬁrst ﬁve books of Ovid’s epic follow the descendants of the river-god Inachus, beginning with Jupiter’s rape of Io and reaching forward to Perseus, and the stemma of the Inachids features prominently in the Hesiodic Catalogue (fr. 122-59 M-W). As a whole, the Metamorphoses delineates the genealogies of the major Greek tribes (Inachids, Thebans, Athenians), and includes the Trojans, the only non-Greek genealogies of the Catalogue, which were dealt with in the last part of Hesiod’s work. Ovid’s foray into the Hesiodic corpus gives us a new perspective to interpreting his aemulatio of Vergil. While the Aeneid marks Vergil’s literary ascent- within the Homeric epics- from the Odyssey to the Iliad, the Metamorphoses draws a trajectory from the Theogony to the Catalogue of Women. Ovid’s hexameter poem is the response to Vergil’s Aeneid, and the Metamorphoses pits Vergil’s Homeric epic against the Hesiodic character of Ovid’s work. Thus, the ancient competition between Homer and Hesiod is revived and recast for a Roman readership. By employing the interpretive tools of intertextuality, narratology, as well as genre and gender theory, I read a number of episodes from Ovid’s corpus against the backdrop of Hesiod’s Ehoiai. It is my contention that the Hesiodic character of Ovid’s work invites the readers to trace and interpret intertextual references to the Catalogue. Although the main focus of this study is Ovid, I also examine what Ovid’s use of Hesiod can tell us about the Catalogue. Focusing mainly on the intergeneric discourse between Hesiodic and Homeric epic, I reassess the use of epic diction in the Catalogue and the juxtaposition between the male-oriented arena of Homeric epic and the female-oriented program of the Ehoiai.