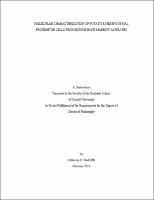 Bone marrow contains many cell types including hematopoietic cells and their precursors, adipocytes, endothelial cells, and osteocytes. There are also cells with reported capacity to differentiate into bone, cartilage, and other tissues. Their descriptive terminology varies and includes mesenchymal stem cell (MSC), stromal stem cell (SSC), and mesenchymal progenitor cell (MPC), used herein. The cellsurface phenotypes of cultured MPCs have been described for humans and other species. However, there is no consensus on their phenotype from uncultured bone marrow mononuclear cells (BMMNC) and poor understanding of their phenotypic changes during culture. These issues complicate clinical use of MPCs in cell-based therapies as extended periods of culture (typically 4-6 weeks) are required to purify and expand cell numbers, making the original phenotype unclear and delaying treatment. To address this problem, my experiments were designed to study the phenotypic changes that occur in equine BMMNCs from isolation through one month culture. Flow cytometry and reverse transcriptase quantitative polymerase chain Results reaction (RT-qPCR) were used to analyze cell-surface molecules. demonstrated numerous dynamic changes in BMMNC phenotype. Next, cell sorting experiments were performed to determine if phenotypic changes during early culture could be exploited for MPC colony enrichment. Magnetic activated cell sorting (MACS) was used to separate adherent BMMNCs based on their expression of cluster of differentiation (CD) marker CD14. BMMNCs were separated into three groups; CD14 positive, CD14 negative, or unsorted. Flow cytometry and RT-qPCR were used to evaluate sorting efficiency and compare groups over time. At day seven, cells positively selected for CD14 were significantly more likely to form colonies than both unsorted and negatively selected cells (P less than or equal to 0.005). Further, MPCs maintained low levels of CD14 expression in long-term culture and upregulated expression in response to lipopolysaccharide. These findings were surprising because by definition, MPCs are thought to be non-hematopoietic because they lack expression of specific hematopoietic molecules such as CD14. Only certain lineages of hematopoietic cells are known to express CD14. Results of my studies support that equine MPCs express and are enriched by CD14, suggesting they have either been misclassified, or may represent a differentiated descendant of a hematopoietic cell.