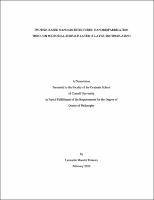 The ability to efficiently build and control structures at the nanometer scale using biomolecules is currently an area of very active research. Although natural systems have a vast repertoire of nanostructures able to self-assemble into complex systems, its adoption in industrial nanofabrication process is still a utopian idea. Crystalline bacterial cell surface layer (S-layer) proteins are an example of biological, self-assembled nanostructures that can be exploited for nanotechnology applications. This dissertation focuses on the self-formation of Lysinibacillus sphaericus S-layer (SbpA) and the exploitation of its intrinsic properties for nanobiofabrication. SbpA self-assembly kinetics were studied in detail, as well as, the interaction of SbpA with synthetic surfaces mimicking the natural substrate used as an anchor by SbpA on the bacterial cell surface. It was found that SbpA self-assembles in solution at a rate that is dependent on temperature, the concentration of SbpA, as well as the concentration of calcium ions, and sodium chloride. In addition, SbpA-carbohydrate interaction is dependent on the carbohydrate density, and the net dissociation rate slows with increasing association times. Surface-enhanced Raman spectroscopy (SERS) substrates were bionanofabricated with the aid of a recombinant SbpA, where sub-micromolar concentration levels of 2-mercaptopyridine could be detected, demonstrating the potential of the bionanofabricated SERS substrate using recombinant SbpA.