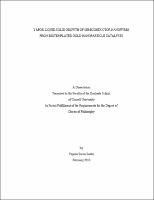 The plethora of sophisticated architectures and physicochemical specificities of biomacromolecules have stimulated researchers to turn to ‘Nature’ for the nanomanufacturing of inorganic functional materials with complex hierarchies and small dimensions that are difficult to achieve with conventional lithographic approaches. Inspired by the extraordinary ability of bacterial surface-layer (S-layer) proteins in the creation of two-dimensional arrays of metallic and semiconductor nanoparticles, this dissertation explores the potential of biotemplated catalysts in the chemical vapor deposition (CVD), vapor-liquid-solid (VLS) synthesis of semiconductor nanowires (NWs). S-layer proteins isolated from Deinococcus radiodurans (HPI) were adsorbed onto Ge substrates and further used as a scaffold for the controlled immobilization of Au nanoparticles (AuNPs). Epitaxial growth of highdensity, vertically oriented GeNWs with controlled diameters and spacings was achieved on Ge(111) substrates despite the protein/carbonaceous material and catalyst size employed (5-20 nm). Similarly, orientation-controlled growth was attained for biotemplated GeNWs on Ge substrates with other crystallographic orientations; these NWs exhibited improved morphologies, higher densities (NWs/μm2), and more uniform lengths compared to NWs grown from non-templated AuNPs on the substrates. Conversely, GeNWs and SiNWs grown on Si substrates displayed random growth directions owing to the formation of a thin oxide layer beneath the biotemplated catalysts. The interplay of parameters such as catalyst size, catalyst density, substrate crystallographic orientation, and protein template was investigated in terms of their effect on the morphology and growth direction of NWs. Surprisingly, the expected denaturation of the HPI S-layer proteins at the high temperatures used for GeNW growth did not disturb the initial location of AuNPs in the organic template. However, issues associated with protein adsorption and orientation on Ge substrates, as well as AuNP coarsening during NW growth initiation preclude the observation of long-range ordered arrays of GeNWs. Nonetheless, the compatibility of the biotemplating catalyst approach with the VLS-CVD growth of GeNWs proved to be suitable for the fabrication of lithium battery anodes with higher current responses and superior reversibility than that of the bare Ge electrodes. Taken together, the findings presented in this dissertation suggest that further improvements in the biotemplating of semiconductor NWs will find applications in areas ranging from nanoelectronics and photonics, to high-density energy storage devices.