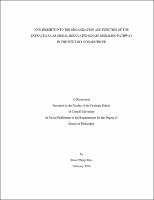 The ERK pathway, a ubiquitously expressed signal transduction module that mediates cellular responses to a variety of stimuli, is activated in gonadotropes following stimulation with the hypothalamic decapeptide GnRH. Several lines of evidence suggest that ERK signaling is important for gonadotrope function; however, little is known regarding the role of ERK signaling in these cells in vivo. The studies described here address aspects of the functional organization and requirement for ERK signaling in differentiated gonadotropes and the role of ERK activity within the reproductive axis in vivo. ERK 2 associated partially and constitutively with low buoyant density membranes (membrane rafts) following fractionation of both T3-1 gonadotrope cells and murine pituitaries. Following treatment with GnRH agonist, activated ERKs were recovered in association with low-density membranes. ERK2 coimmunoprecipitated with the GnRHR from these fractions suggesting that coupling of the GnRHR to the ERK signaling pathway may involve the formation of signaling complexes associated with membrane rafts. To examine the requirement for ERK signaling within gonadotropes in vivo, a mouse model with a pituitary-targeted ablation of ERK1 and ERK2 was generated. ERK deficient male mice were fertile while females demonstrated anovulatory infertility associated with a deficiency of luteinizing hormone (LH). The mechanism underlying this gender-specific phenotype was linked to impaired transcriptional upregulation of the ERK-dependent transcription factor Egr-1 which is required for LH biosynthesis. Finally, to explore the role of ERK signaling in upregulation of immediate early response genes in the gonadotrope, we examined expression of the orphan nuclear receptor Nur77. Our results establish Nur77 as an ERK-dependent, GnRHresponsive immediate early gene in the gonadotrope. Analysis of the signaling activities required for Nur77 upregulation led to the unexpected finding that c-Raf kinase is not required for GnRH-induced activation of the ERK pathway. Mice with a pituitary-targeted conditional ablation of c-Raf were viable and fertile. Transcriptional upregulation of Nur77 was unimpaired in gonadotropes from these mice, while being blocked in gonadotropes from mice with pituitary disruption of ERK1 and 2. These results confirm the requirement for ERK signaling for gonadotrope function, and shed new light on the organization of this pathway in the gonadotrope as well as its role in the sexually dimorphic regulation of reproductive function.