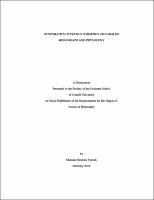 Almonds (Prunus dulcis) and peaches (Prunus persica), two of the most economically important fruit crops in subtropical and temperate climates, are members of the genus Prunus L. subgenus Amygdalus L. Previous hypotheses of relationships within Prunus were either based on one or a few morphological characters, or when molecular data were used, the Amygdalus group was represented by only a few species. Furthermore, the latest monograph for Amygdalus is more than 150 years old. Here, a monograph of Prunus subgenus Amygdalus including 24 species is presented. A key to the identification of species within Amygdalus, descriptions, diagnostic characters, phenology, habitat, distribution maps and specimens examined are presented. Morphological and molecular sequence data obtained from six chloroplast gene regions (trnL-trnL-trnF, trnS-trnG-trnG, trnH-psbA, rpL16, ndhF-rpL32 and partially trnQ-rps16) and one nuclear gene, s6pdh, were used in this study to construct a phylogeny from a comprehensive sample of Amygdalus species and additional relevant outgroup taxa. A very strongly supported clade of Prunus subg. Amygdalus was recovered, and includes both almonds and peaches. Amygdalus is diagnosed by having pubescent drupes, mostly splitting mesocarp, endocarp pitted or grooved, and sepal margins entire. Based on these results, P. tenella and P. petunikowii of the section Chamaeamygdalus Focke and P. triloba and P. pedunculata of the section Louiseania Carr. should be excluded from subg. Amygdalus. Relationships of Amygdalus with other Prunus species remain unresolved because it occurred in a polytomy including section Chamaeamydalus and subgenus Prunus s.l. Within Amygdalus, two clades are strongly supported. The first is section Persica Mill, including the six species: P. persica (including P. ferganensis), P. kansuensis, P. mira and P. davidiana, in addition to P. tangutica and P. mongolica. The second clade is the almond clade, section Amygdalus s.s., within which strongly supported resolution is lacking. Detailed results of individual and combined datasets are presented and character evolution is discussed.