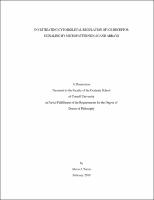 The high affinity immunoglobulin E (IgE ) receptor (FcεRI) is a member of a family of related antigen receptors with conserved structure and similar roles in initiating intracellular signaling in response to an outside stimulus. In mammalian cells, FcεRI is found primarily on the surface of mast cells and basophils. Activation of this receptor by multivalent antigen triggers a series of intracellular signaling events that ultimately lead to the secretion of preformed mediators, such as histamine and serotonin, which are responsible for allergic reactions. Our recent efforts in the study of immunoreceptor signaling have focused on the participation of the plasma membrane and the actin cytoskeleton. However, tools for investigating biomolecular dynamics and interactions that occur within close proximity to the plasma membrane of living cells are somewhat limited. Micro-fabricated surfaces have been used for applications in cell and tissue engineering, although their full potential has not been explored, particularly in the area of molecular cell biology. We have recently developed a polymer lift-off method for localizing the initial stimulus to micron size patches of antigens such that assembly of signaling components could be visualized with selective fluorescent labeling and confocal microscopy. Employing these technologies we have investigated fundamental mechanisms in immune cell signaling, specifically IgE receptor (FcεRI) signaling involved in allergic responses on mast cells. In past years, our group has observed spatially and temporally resolved responses, including receptor phosphorylation, selective accumulation of Lyn kinase and other membrane components. In this work, I have applied these tools to investigate functional and structural implications of the actin cytoskeleton regulation of FcεRI signaling and the cytoskeletal dependence of activated receptor internalization. I have shown that particular actin binding proteins, paxillin, talin and vinculin co-redistribute at the patterned antigen and clustered receptors in a similar time course as polymerized actin. These proteins have been extensively characterized in the context of integrin signaling and focal adhesion assembly, but little is known about their involvement in immune cell signaling. Our biochemical data suggests that these proteins have functional relevance in some of the early and late events of the signaling cascade. In addition, I show that the GTPase dynamin 2, which is commonly associated with receptor endocytosis, is selectively recruited to the sites of receptor clustering. Protein knockdown of dynamin 2 decreases the accumulation of F-actin at the clustered receptors, implicating dynamin in the regulation of FcεRI mediated actin redistribution. These results point a possible role for dynamin-actin interactions in regulating activated IgEFcεRI internalization.