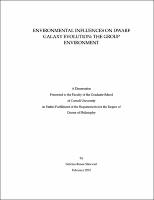 Galaxy groups are a rich source of information concerning galaxy evolution as they represent a fundamental link between individual galaxies and large scale structures. Nearby groups probe the low end of the galaxy mass function for the dwarf systems that constitute the most numerous extragalactic population in the local universe [Karachentsev et al., 2004]. Inspired by recent progress in our understanding of the Local Group, this dissertation addresses how much of this knowledge can be applied to other nearby groups by focusing on the Leo I Group at 11 Mpc. Gas-deﬁcient, early-type dwarfs dominate the Local Group (Mateo [1998]; Belokurov et al. [2007]), but a few faint, HI-bearing dwarfs have been discovered in the outskirts of the Milky Way’s inﬂuence (e.g. Leo T; Irwin et al. [2007]). We use the wide areal coverage of the Arecibo Legacy Fast ALFA (ALFALFA) HI survey to search the full extent of Leo I and exploit the survey’s superior sensitivity, spatial and spectral resolution to probe lower HI masses than previous HI surveys. ALFALFA ﬁnds in Leo I a signiﬁcant population of low surface brightness dwarfs missed by optical surveys which suggests similar systems in the Local Group may represent a so far poorly studied population of widely distributed, optically faint yet gas-bearing dwarfs. The morphological segregation seen in the Local Group is also reﬂected in Leo I and further suggests a signiﬁcant population of gas-bearing dwarfs may be missed by surveys narrowly focused around more massive systems. The Leo I HI mass function is dominated by low mass objects yielding a steeper low-mass slope than found for luminosity functions of the group. However, the slope still falls short of that predicted by simulations of structure formation. Further contributors to this gap may be dwarf systems formed from tidal material (TDGs), the fraction of which, even in the Local Group, remains unknown. We ﬁnd that TDGs can be identiﬁed from the ALFALFA survey based on their proximity to tidal remnants and from optical spectroscopic followup via their high gas fractions and high metallicities given their luminosities. However, despite the two large tidal remnants found in Leo I, our search results in only two TDGs for the group. If most dwarfs are instead formed from small dark matter haloes as suggested by the ΛCDM framework, different classes of dwarf may reﬂect early versus late stages of evolution. Dwarfs of mixed morphologies, like the six so-called transition dwarfs in the Local Group, may represent the evolutionary link between gas-rich and gas-poor classes, but when constrained by the requirement of HII regions, we ﬁnd only one such candidate in Leo I. The work presented here lays the groundwork for future HI-based group studies which will be made possible with rich ALFALFA dataset.