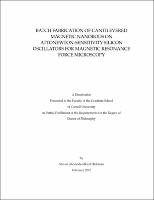 Magnetic resonance spectroscopy and imaging are powerful tools for characterizing soft materials at length scales down to a few microns. While mechanical detection has enabled observation of magnetic resonance from single electron spins and nanoscale volumes of nuclear spins, all such experiments to date have required manually afﬁxing a magnetic particle or a sample to the leading edge of a fragile microcantilever. In this dissertation, work to batch-fabricate attonewton sensitivity cantilevers with integrated, overhanging nickel magnets is described. That the magnet overhangs the leading edge of the cantilever is necessary to mitigate surface-induced force noise, the dominant source of noise in all high-sensitivity magnetic resonance force microscopy measurements to date. The smallest magnets produced had diameters of 70 nm. Three methods were developed to produce such overhanging magnets on single-crystal silicon cantilevers. Proof-of-concept work was demonstrated on methods involving under-etching the magnetic nanorods using potassium hydroxide, and fabricating the nanorods over co-planar silicon oxide pillars. Complete devices were produced via a method in which the magnetic nanorods were under-etched by an isotropic sulfur hexaﬂuoride reactive ion plasma etch. In addition to developing processes to produce overhanging nanorods, signiﬁcant challenges in lithographic alignment and silicide formation were over- come. Cantilever magnetometry demonstrated a net tip magnetization between 57 and 77 % of that expected for bulk nickel. Good leading-edge magnetization of the nanorods was conﬁrmed by using the cantilevers to detect, via forcegradients, electron spin resonance from nitroxide spin labels in a thin ﬁlm. This is the ﬁrst time that magnetic resonance force microscopy has been implemented with magnet-tipped cantilevers produced by batch fabrication. Over the same thin ﬁlm used for the electron spin resonance experiment, the cantilevers were shown to have extremely low surface-induced force noise. The work covered in this dissertation signiﬁcantly advances the feasibility of scanned-probe nanoscale magnetic resonance imaging of as-fabricated thin-ﬁlm samples and devices.