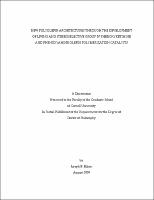 Since the pioneering work by Ziegler and Natta in the 1950s on metalcatalyzed olefin polymerization, decades of research have led to the development of catalysts capable of furnishing a wide variety of polymers. Early work focused on heterogeneous catalysts, but the later development of homogeneous catalysts provided mechanistic insights that have allowed researchers to develop catalysts that provide access and control over specific polymer microstructures. The majority of commercial polyolefins has traditionally been limited to homopolymers, random copolymers, or blends thereof. In the past decade however, the development of olefin polymerization catalysts that are living have now allowed access to virtually a limitless number of new polyolefin architectures. Despite the fact that a living polymerization system is capable of producing only one polymer chain per metal center, the real advantage lies in the ability to synthesize well-defined block copolymers and identify new materials with promising properties. Our efforts have focused on C2-symmetric bis(phenoxyketimine) titanium dichloride complexes and C1-symmetric phenoxyamine zirconium and hafnium dibenzyl complexes supported by an sp3-C donor. We have shown that upon activation, these complexes can catalyze the living and isoselective polymerization of !-olefins. Using these, the synthesis of a number of new block copolymers featuring semicrystalline isotactic polypropylene segments and amorphous poly(ethylene-co-propylene) segments was accomplished. The resultant block copolymers displayed elastomeric behavior and excellent mechanical properties. We have further shown that catalysts derived from the C1-symmetric phenoxyamine zirconium and hafnium dibenzyl complexes are capable of the cyclopolymerization of 1,5-hexadiene. The resultant polymers were shown to have a previously unreported cis-isotactic microstructure.