From Counterinsurgency To Human Rights: The United States, Argentina, And The Cold War 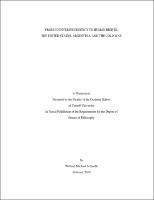 This study demonstrates how U.S. support for the 1976 Argentine military coup exemplified a defining feature of U.S. policy toward Latin America during the Cold War, namely, the maintenance of strong links with politically ambitious, anticommunist Latin American militaries to protect U.S. national security. By integrating Argentina into the larger pattern of imperial U.S. policy toward the region, this study reveals how U.S. military assistance and training programs in the 1960s and early 1970s undermined Argentina’s democratic institutions and contributed to the formation of a distinctly Argentine national security doctrine—the blueprint for the military’s extraordinarily brutal counterinsurgency campaign following the 1976 coup d’état. Second, this study illuminates how the effort to curtail state-sanctioned violence in Argentina served as a defining test-case for the blossoming human rights movement in the United States. Comprised of a disparate mix of grassroots human rights organizers, Washington-based lobbyists, and sympathetic members of Congress, human rights advocates consciously embodied a counter-movement to the maintenance of close U.S. ties to staunchly anti-communist, right-wing military regimes. Finally, this study asserts that Argentina served as a defining test-case for Jimmy Carter’s human rights policy. Entering the White House at the height of statesanctioned violence in Argentina, Carter aimed to dramatically shift United States policy from subtle support for the military’s dirty war to public condemnation of human rights violations. With strong ties to the non-governmental human rights community and sympathetic legislators on Capitol Hill, the newly-formed Department of State Bureau of Human Rights and Humanitarian Affairs was particularly active in the struggle to promote human rights in U.S.-Argentine relations. The results were mixed; on the one hand, by late 1978, the Carter Administration had achieved significant success in eliciting human rights improvements from the military junta, particularly by orchestrating a formal visit by the Inter-American Human Rights Commission. On the other hand, as the Administration grappled with rising Cold War tension, revolutionary ferment in the Developing World, and a flagging U.S. economy over the course of 1979 and 1980, human rights moved increasingly to the background as a U.S. policy priority, a trend particularly evident in U.S.-Argentine relations.