Simmel In The Laboratory: An Experimental Investigation Into The Relationship Between Secrecy And Cohesion 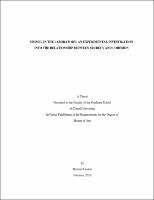 This paper investigates whether there is a positive relationship between secrecy and cohesion – a proposition first made by Georg Simmel. More precisely, the study used the experimental method to investigate whether having members of a dyad share a secret with each other, increased cohesion in the dyad compared to a control. A hierarchical linear model was used to analyze the data. An interaction effect was found between trust and secrecy, but the results are not conclusive. The paper reviews work on secrecy (paying particular attention to Simmel’s perspective), cohesion, and the mechanisms linking the two. It ends by suggesting improvements to the experimental design and some theoretical extensions of the current study.