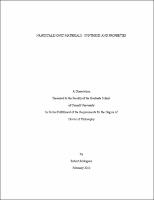 Nanoscale Ionic Materials (NIMs) are hybrid organic-inorganic materials which consist of a core nanoparticle, a covalently grafted charged corona, and an associated canopy with a charge opposite that of the canopy. In this thesis the synthesis and properties of NIMs are discussed. NIMs are synthesized by covalently grafting a sulfonic acid terminated silane to the surface of a silica nanoparticle. This sulfonic acid group is then reacted with an amine terminated poly(ethylene glycol) in a simple acid-base reaction. By measuring the titration curve of this reaction the NIMs transition, where there is a one-to-one ratio of sulfonic acid groups to canopy molecules, can be experimentally determined. The effects of core volume fraction and amine topology on the structure and rheology of NIMs is also presented. It is found that NIMs rheology can be tuned to show behavior ranging from simple Newtonian, to non-Newtonian in the form of shear thinning by varying core volume fraction. Upon further analysis, a hypothetical NIMs model is presented and consists of the core, covalently grafted corona, and the associated canopy molecules organizing in layers around each particle. Small-angle x-ray scattering studies reveal that the core microstructure is not the single parameter which is controlling NIMs rheological behavior. These studies instead show that NIMs retain an amorphous structure and that there is a complex interplay between all NIMs components which is controlling the rheological behavior.