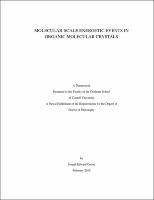 This thesis is broken up into two main parts: ﬁrstly, the characterisation of Ehrlich– Schw¨ ebel barriers for some common organic molecules and secondly an examination o of the hyperthermal deposition of pentacene. The Ehrlich–Schw¨ ebel barrier of the o sexiphenyl molecule was examined in detail and the system was used as a test case in the evaluation of the ability of potential models to capture accurate molecular conformation. The MM3π potential was found to be the best choice and even compared favourably to the best ab initio models. In the subsequent search for an Ehrlich– Schw¨ ebel barrier the ﬂexible backbone of the sexiphenyl molecule was observed to o promote a “Fosbury Flop” type mechanism where the molecule rolls oﬀ the step edge with a minimum barrrier of 30-35 kJ/mol. After the introduction of six further small organic molecules (anthracene, tetracene, pentacene, diindenoperylene, C60 and rubrene), both homo–epitaxial and hetero–epitaxial barriers were studied and a correlation was found between the Ehrlich–Schw¨ ebel barrier and the binding energy of the molecule o to the terrace surface. Finally, the process of hyperthermal deposition of pentacene was examined using Molecular Dynamics simulations concentrating on mechanisms such as molecular insertion and adsorption. The behaviour of the system was documented as a function of incident energy (0-10eV), incident angle and molecular orientation and compared to published experimental data.