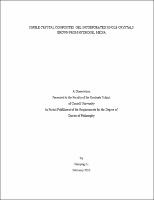 In Nature, organisms produce single-crystal composites of calcite crystals with incorporated biomacromolecular matrices. In order to understand this phenomenon, we have developed a model system of agarose-incorporated calcite single-crystals grown from agarose hydrogels. Annular dark-field scanning transmission electron microscopy (ADF-STEM) and electron tomography reveal how random three-dimensional networks of agarose nano-fibers (diameter: 13 ± 5 nm) are incorporated into single-crystals of synthetic calcite by allowing both high- and low-energy fiber/crystal interface facets to satisfy network curvatures. The effects of gel concentration, gel strength, and the concentration of calcium ions on the amount of incorporated polymers have been investigated qualitatively by scanning electron microscopy (SEM) and quantitatively by thermogravimetry analysis (TGA). The results show that gel-grown calcite crystals have two states: without and with polymer incorporation. Crystals switch from the former state to the latter one when gel strength and/or crystal growth rate increase, suggesting that at the growth fronts there are two competitions: a force competition between a disjoining force, a hydrodynamic force, and the resistance of the gel network and a mass competition between growth fronts screened and unscreened by the gel fibers. The interplay between these two factors determines if the gel polymers are incorporated by the growing crystals. TEM observation shows that agarose/calcite single-crystal composites become porous single-crystals after removal of the incorporated polymers by pyrolysis at 300oC. The specific surface area (5.8 m2 g-1 for crystals grown from 3 w/v % gels) measured by Brunauer, Emmett and Teller (BET) method is around 100 times higher than that of the non-porous calcite single-crystals with the same size. In addition to calcite, we prepared gel-grown glycine and calcium tartrate single-crystals and found that these two crystals also incorporated gel polymers. These results imply that gel-incorporation might be a general phenomenon for crystallization in gels. This work presents an approach for modifying the internal structures of crystals and synthesizing single-crystal composites and porous single-crystals. Potential uses for the gel method include the preparation of materials that require both high crystallinity and high surface areas such as photovoltaic materials.