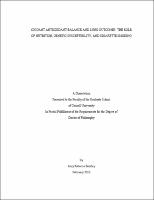 The aim of this research was to investigate the role of variability in antioxidant defenses in susceptibility to chronic obstructive pulmonary disease (COPD). Although exposure to cigarette smoke is the most important risk factor for COPD and is present in the vast majority of cases, only a minority of smokers develop disease. The determinants of disease susceptibility are key to understanding etiology and targeting interventions. The studies conducted for this dissertation address the hypothesis that susceptibility results from limitations in antioxidant defenses, resulting from low dietary antioxidant intake or variation in genetic factors influencing antioxidant function, to counteract the assault of oxidants present in cigarette smoke. The first project addressed the association of dietary antioxidants and rate of decline in lung function in a prospective study of elderly. Among current smokers, higher intakes of foods with antioxidant properties were each associated with an attenuated rate of decline in lung function, with the strongest associations observed in the subgroup of smokers who quit during follow-up; this study supports a role of antioxidant defenses in determining COPD susceptibility. Sequence variation in genes encoding antioxidant-related enzymes also contributes to an individual’s antioxidant defenses and the second and third projects address the role of genetic variation. Given that published research on the relation of candidate genes encoding antioxidant enzymes with lung function is rapidly emerging, a systematic review of the literature was conducted. Conclusions from this work motivated selection of candidate genes and study design decisions for the final project of this dissertation: an association study of SNPs in genes encoding antioxidant enzymes and lung function phenotypes in an elderly cohort. SNPs were selected for coverage of the full sequence variation of a broad range of antioxidant enzymes. SNPs in genes encoding members of the peroxiredoxin and isocitrate dehydrogenases were consistently associated with lung phenotypes, particularly in interaction with smoking parameters. The findings are consistent with the hypothesis that variability in the antioxidant defenses is of particular relevance in those with high oxidant burden. The results from these studies support the hypothesis that variability in antioxidant defenses contributes to COPD susceptibility.