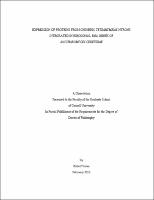 The group I introns from Tetrahymena thermophila, Tth.L1925, and Physarum polycephalum, Ppo.L1925, are closely related, sharing 70% sequence identity in their ribozyme regions. However, Ppo.L1925 also contains an open reading frame (ORF) encoding the homing endonuclease I-PpoI, which is separated from the ribozyme by a 53 nucleotide 3’UTR region; Tth.L1925 lacks both the ORF and 3’UTR regions. Previous studies of Ppo.L1925 have shown that the I-PpoI protein is translated from the RNA Pol I-derived spliced intron RNA. In order to better understand Ppo.L1925-encoded ORF translation, I created several chimeric ORF-containing Tth.L1925 introns and integrated them into the rDNA of Saccharomyces cerevisiae. Previous attempts to exchange the I-PpoI ORF found that small (~300 bp) ORFs can be integrated whereas larger ORFs disrupt intron splicing. I found that Tth.L1925based introns could accommodate and express both small and larger ORFs; these introns produce protein at levels similar to proteins produced from wild-type Ppo.L1925 (~ 0.01% of total yeast protein). To better understand the effect of intron sequence on protein expression, I added Ppo.L1925 sequences to chimeric Tth.L1925 introns. Some 3’UTR sequences had previously been shown to increase expression from Ppo.L1925 nearly 20-fold; however, all of the 3’UTR sequences tested in chimeric Tth.L1925 introns lowered expression. Replacing the Tth.L1925 5’end sequence with that of Ppo.L1925, though, increased expression nearly 10-fold. To further study the effect of the intron 5’ end sequence on expression, I created an intron pool with random 5’ end sequences. About 25% of these introns had increased expression up to 20-fold, while about 50% had their expression lowered to undetectable levels. I examined two models for expression of chimeric intron-encoded ORFs that explain how 5’ end sequence changes could affect translation: interaction with the invasive growth IRES system and translation through formation of intron RNA circles. Addition of an invasive growth IRES sequence did not increase expression from a Tth.L1925-based intron, while RTPCR amplification of intron RNA circle junctions demonstrated no relationship between the circle species formed and expression level. These results suggest that the intron-encoded ORF is not being translated through either of these two models.