Surrendering The Higher Ground: The Abuse Of Combatants During War 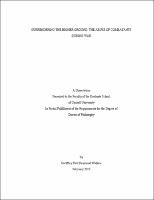 What explains the differences in the ways captor states choose to treat enemy prisoners during war? Why are the rights of some prisoners rigorously upheld, while in other cases they are viewed as expendable? I argue the abuse of captured combatants largely flows from the nature of the belligerents and bloodshed during war. According to the nature of the belligerents, I argue that democracies are less likely on average to abuse prisoners than their autocratic counterparts. However, I propose the reasons for this democratic distinctiveness are less a function of domestic norms of individual rights or nonviolence, but more due to the greater sensitivity of democracies to fears over retaliation as well as to the strategic benefits possible through good conduct. On the other hand, the bloodshed wrought by the aims states seek to attain through war, along with the severity of the fighting, strongly increase the chances that states will abuse their prisoners. In order to assess these arguments, I construct a new data set on the treatment of captured combatants during all interstate wars from 1898 to 2003. I then provide further support for the findings from the quantitative analysis using a series of in-depth case studies of several episodes of both the abuse and humane treatment of enemy prisoners.