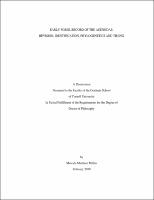 The Asteridae, a group characterized by fused corollas and iridoid compounds, comprises around 1/3-1/4 of all flowering plants, some 8000 species in 100-104 families, some of which, bear great economical importance (e.g. Solanaceae- tomato, potato, chili pepper, eggplant, tobacco; Rubiaceae-coffee; Theaceae-tea; Asteraceaesunflower, lettuce, artichoke; Lamiaceae- oregano, thyme, sage, mint; Apiaceaecaraway, celery, dill; Ericaceae- blueberries, cranberries). Phylogenetic analyses have identified four main clades of asterids; Cornales, Ericales, Lamiids and Campanulids where the latter two correspond to Euasteridae. A revision of 257 fossil taxa once assigned to the Asteridae showed that 172 (66%) could be considered accepted, based on three criteria: inclusion of the fossil in phylogenetic analysis, thorough discussion of key characters that place the fossil in a particular clade and list of key characters. The minimum age dating of the asterid phylogeny using these fossils revealed that the first two lineages, the Cornales and the Ericales were well established by the Late Cretaceous as evidenced by the fossils from the Turonian of Hydrangeaceae, Cornaceae, Ericaceae, Actinidiaceae and the newly described Pentapetalum trifasciculandricus related to the Theales. The other two lineages, Lamiids and Campanulids, were established shortly after, in the Santonian. Although by traditional methods, Pentapetalum appear to be a member of the Theaceae s.s., cladistic analyses based on 61 morphological characters and 5 molecular markers (rbcL, matK, trnL-trnF, matR and ITS), placed it in the Pentaphylacaceae/Ternstroemiaceae. Similar analyses, however, failed to solve the relationships of Solanites brongniartii, a presumed member of the Solanaceae from the Oligocene of France. The analysis using 23 morphological characters and 6 molecular markers (rbcL, matK, ndhF, trnT-trnF, trnV and rps16) offered six alternative placements for S. brongniartii but all of them within the Eusteridae. Other fossil species assigned to the genus Solanites, from the Eocene of North America, proved to have been misidentified as none of them fit the description for the genus. Three of them –S. saportana, S. crassus and S. sarachaformis– do not have enough characters to produce an accurate identification, but S. pusillus proved to be a member of the Rhamnaceae, a rosid family.