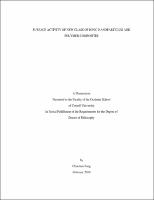 The introduction of nanoparticles into a polymer to form organic-inorganic nanocomposites can greatly enhance the properties of the host polymer. Nanoscale ionic materials, NIMs are new hybrid particles comprised of an inorganic core functionalized with a soft organic shell. Because of the hybrid nature, their properties can be controlled by varying the chemical composition and structure of the core and the canopy. This thesis discusses the synthesis, characterization and bulk and surface properties of a series of new NIMs and NIMs based nanocomposite materials. A new series of NIMs and NIMs based nanocomposites was synthesized. The surface and bulk properties are characterized and discussed in terms of possible polymerparticle interactions by considering a variety of cores (silica and carbon) and a range of polymer matrices (polystyrene, polyethylene glycol, and PDMS-polyurea copolymers). By tailoring the polarity and surface energy between particle-particle and particle-polymer it is possible to control the geometry, size and dispersion of the nanoparticles in the nanocomposites. A simple yet general coating method to plasma treated polymeric substrates is also presented. The method is based on electrostatic interactions between the surface functionalized nanoparticles and the charged substrate and leads to stable and solvent resistant multilayer coatings. The coatings render PP hydrophilic and in the case of PP fabric superhydrophilic. The superhydrophilicity is attributed to the topography and increased roughness of the fabric compared to a planar, smooth substrate. Finally, a series of new PDMS-polyurea segmented copolymers and nanocomposites was synthesized and their settlement and fouling release behavior was evaluated. The extent of microphase separation and the ability of different domains to crystallize affect the surface and bulk properties of the copolymers. By varying the amount of the soft PDMS segment as well as using nanoparticles we were able to develop copolymers and nanocomposites with moduli spanning a range of more than four orders of magnitude. All copolymers and nanocomposites are stronger (in some cases by orders of magnitude) than PDMS. Surface studies using profilometry and AFM show surface nanostructuring due to phase separation with both nano and microscale features. The morphology can be further modified by the presence of fluorinated groups in the copolymer or the presence of nanoparticles in the nanocomposites. Preliminary studies on settlement and removal of sporelings of Ulva show that the critical pressure to remove 50% of the sporelings is at least comparable and in some cases lower compared to a PDMS elastomer. Additionally a series based on mono-, bifunctional PEG segments shows improved settlement behavior of barnacle larvae compared to standard PDMS. These findings are quite significant as the new coatings combine and at times exceed the fouling release performance of PDMS but are much stronger and tougher.