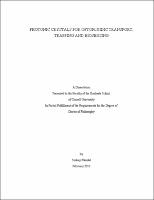 Photonic crystals, since their discovery in 1987 have been of great interest to the optics community. Their unique optical properties have revolutionized the field of photonics and have enabled a new class of optical devices with applications in a broad range of areas such as creating nanophotonic light guiding circuits, efficient optical add-drop filters and modulators as well as a new class of low loss optical fibers. This thesis work aims to exploit the optical properties of photonic crystals that enable them to strongly confine and guide light towards developing and designing novel optical devices for performing optofluidic transport, trapping and biosensing. While optical biosensors are of great interest to the biosensing community, one of the limitations of current optical nanobiosensors is their inability to perform a large number of detections in parallel. I have demonstrated a novel one-dimensional resonant photonic crystal architecture that is extremely well suited for performing highly sensitive and multiplexed, label-free biological detections. These sensors also have very a small form-factor allowing for the successful detection of tens of attograms of bound mass on the sensor surface. Over the last two decades, optical tweezers have been developed to exert optical forces for trapping and manipulating microparticles and cells. However, they exhibit two significant drawbacks. Firstly, they have a very small interaction length over which they can exert optical forces on particles thus limiting the distances over which particles can be propelled using optical scattering forces. Additionally, they are diffraction limited systems which make them incapable of trapping smaller objects such as dielectric nanoparticles and biomolecules. In my doctoral work, I have demonstrated for the first time, the ability to exploit liquid-core waveguiding structures to propel dielectric microspheres over long distances due to their ability to strongly confine and guide light thus overcoming the limitation of previous systems with respect to their small interaction lengths. I have also demonstrated a resonant photonic crystal architecture that overcomes the limitations imposed by diffraction by confining the optical field to sub-wavelength volumes while simultaneously amplifying it. This has enabled the trapping of nanoparticles as small as 48-nm (in diameter) and trap stiffnesses that are an order of magnitude higher than the current state-of-the-art. The results of this work will enable future devices with the ability to potentially trap and sense single biomolecules such as proteins. In addition, by integrating these photonic crystal elements with other photonic circuit elements, it opens up a vast number of exciting possibilities for optofluidically enabled transport in micro and nano-fluidic systems. In particular, my doctoral research lays down the groundwork for enabling future work on sensitive size based optical chromatography and ultra-sensitive biosensors.