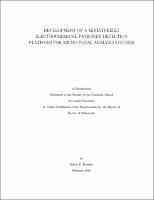 This thesis describes a translational research eﬀort to design a portable device, the miniEC, that on its own, is useful for detection of nucleic acids of pathogens and other analytes, but can also be integrated into a complete micro-total analysis system. The design incorporated a microfabricated liposome-ampliﬁed biosensor, a potentiostat for electrochemical tests, a liquid crystal display, a pushbutton interface for user input, memory for data storage and a serial connection for networking the device to a PC. In operation, the potentiostat powers the biosensor and is also responsible for amplifying and measuring the sensor’s output. Speciﬁcity of the biosensor is ensured by DNA capture and reporter probes that hybridize with the target nucleic acid sequence. The reporter probes are coupled to liposomes entrapping the electrochemically active redox couple, potassium ferri/ferrohexacyanide. The capture probes are coupled to superparamagnetic beads. After hybridization, The liposome-target-bead complexes are captured by a magnet within the biosensor. The liposomes are then lysed to release the electrochemical markers unto an interdigitated ultramicroelectrode array. The redox activity of the markers on the electrodes is measured as a current, that is subsequently displayed and stored by the miniaturized instrumentation. The portable miniEC system replaces electrodes, potentiostat and computer systems in conventional electrochemical set ups. Use of the inexpensive, low-power, powerful and energy eﬃcient MSP430 microcontroller together with other carefully selected, low power, oﬀ-the-shelf components, resulted in a design that can run for months on a single AA or AAA battery. Also, emphasis on low cost resulted in a compact design with a minimal number of components, that altogether, cost less than $50 in prototype quantities. The accuracy of the miniEC was evaluated by comparing its performance to a standard bench-top electrochemical workstation in static and dynamic constant current amperometric experiments. In both sets of experiments, the inexpensive miniEC’s performance was comparable in signal strength and sensitivity to that of the electrochemical workstation. It was then successfully used in the detection of dengue fever virus RNA. The design of the biosensor, hardware and embedded software was modular, general and ﬂexible such that diﬀerentiated products could easily be generated for applications in diﬀerent ﬁelds within a short development window. We provided an example of such a diﬀerentiated product with a step by step enhancement of the basic unit into a 5-channel multi-sensor unit. Applied to Cryptosporidium parvum detection, the multi-sensor miniEC was capable of single oocyst detection.