The Role Of Long-Chain Polyunsaturated Fatty Acids And Resveratrol In Brain Nutrition: From Brain Development To Aging 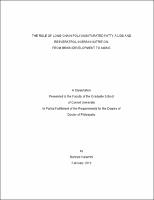 Nutrients play a key role in central nervous system (CNS) development during fetal and early postnatal life, and their depletions can have devastating physiological results. One class of nutrients these nutrients are long-chain polyunsaturated fatty acids (LCPUFA), specifically docosohexaenoic acid (DHA) and arachidonic acid (ARA). These lipids accumulate rapidly in the CNS, and although neonates are able to produce them from precursors at low rates, optimal development depends on preformed sources from human breast milk or formula. We report a descriptive meta-analysis that considered 106 studies of humauin breast milk and found that mean (±SD) concentration of DHA in breast milk (by weight) is 0.32 ± 0.22% and that of AA is 0.47 ± 0.13%. This comprehensive analysis of breast-milk LCPUFA indicates a broad range of these lipids worldwide and serves as a guide for infant feeding. Dietary components with unknown or potentially deleterious effects remain important to characterize. While epidemiological data has implicated the role of trans fatty acid in increasing risk factors for heart disease, studies show that isolated trans fatty acids do not show atherogenic effects and remain difficult to accurately detect in mammalian tissues. We report these fatty acids in samples from patients with histologically-confirmed Alzheimer’s disease and normal aged subjects and show differences to be nonsignificant. The distributions of these trans fatty acids are consistent with their origin from diets that are a composite of dairy and partially hydrogenated vegetable oil trans sources. While a number of factors combine to result in decreased function and cognition in aging humans, the hypotheses that oxidation plays a major role in aging has garnered much attention. While many antioxidant-derived plant compounds have provided promise against aging in animal models, resveratrol, a grape polyphenol, has received significant attention for its antioxidant properties and action as a calorie-restriction mimetic. We fed dietary resveratrol to wild-type and transgenic Alzheimer’s Disease mice and show a number of targets specific to the pathophysiology of Alzheimer’s, specifically transthyretin, drebrin, and glycogen synthase kinase-3, are positively influenced. These data suggest new mechanisms whereby this polyphenol putatively exerts protective effects in aging and beyond.