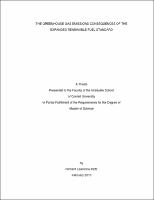 This thesis uses a computable general equilibrium model to evaluate the greenhouse gas emissions consequences of the United States’ Renewable Fuel Standard (RFS) mandate for corn based ethanol. The RFS can reduce emissions if the potential emissions savings, that result as ethanol displaces gasoline, are greater than the resulting carbon leakage, which occurs because markets and sectors adjust to the increased consumption of ethanol or the decreased US consumption of gasoline. The general equilibrium framework allows for the impact of the expanded RFS on behavior in each of the major US sectors (transportation, fuel production and agriculture) and international markets (crude oil and land) to be measured and mapped to greenhouse gas emissions. Estimating emissions in the general equilibrium framework differs from previous studies that estimate the carbon leakage from ethanol consumption. In contrast to studies that rely on world agricultural models (Searchinger et al. (2008); Tokgoz et al. (2008)), this framework is able to capture the impact of the Renewable Fuel Standard (RFS) on the domestic market for blended fuel, and the international crude oil market. Compared to lifecycle analysis (Farrell et al. (2006); Hill et al. (2006)), which links sectors using fixed behavioral relationships that are based on the flow of material and energy, the general equilibrium framework is able to incorporate both behavioral adjustments and emissions from sectors that do not necessarily fall in the standard lifecycle boundaries. We find that the Renewable Fuel Standard mandate directly reduces gasoline consumption by 0.6% and 2.5% relative to baseline levels in 2009 and 2015 respectively. These reductions lead to potential emissions savings of 6.5 TgCO2e (roughly 0.1% of total US emissions) in 2009 and 26.32 TgCO2e (0.5% of total US emissions) in 2015. These savings are very small because we project the baseline consumption of ethanol to increase to levels close to mandated levels had the RFS not been implemented. We also find that these potential savings are totally offset by carbon leakage in other markets. In 2009, approximately 50% of the potential emissions savings is offset by domestic leakage. The main sources of leakage domestically are the expansion of ethanol production, which offsets 21% of potential savings, and the expansion and intensification of the agricultural sector, which offsets 22% of potential savings. A smaller leakage, 6% of potential savings, occurs in the domestic fuel market because the price of blended fuel falls in response to the RFS. In 2015, the domestic leakages are smaller and offset 40% of potential emissions savings. The main sources of leakage are again fuel production and domestic agriculture, which offset 21% and 22% of potential emissions savings. However, we find that the price of blended fuel increases in response to the mandate leading to addition emissions savings of 1% in domestic fuel markets. Internationally, the magnitudes of the leakages are substantially larger. As the RFS depresses the world price of crude oil, the consumption of crude oil increases and results in a leakage that offsets 168% of potential emissions savings in 2009 and 257% of the potential emissions savings in 2015. In addition, the RFS reduces US crop exports and causes a small expansion of world agricultural production on to previously uncultivated land. The carbon emitted as a result of this expansion is at least 1800% greater than the potential emissions savings of the Renewable Fuel Standard for each year between 2009 and 2015. We also find that our estimation of the emissions consequences of the RFS deviate from the results of standard lifecycle analysis (LCA) because of contrasting behavioral assumptions. Compared to our general equilibrium analysis, standard LCA methods estimate similar reductions in transportation emissions and similar increases in fuel production emissions. Incorporating behavioral adjustments in these two sectors leads to projected emissions savings that are 15% below LCA estimates in 2009 and 1% higher than LCA estimates in 2015. We also find that compared to our general equilibrium analysis, LCA overestimates the increase in corn production due to the RFS, which leads to an underestimate of total emissions savings of close to 25%. However, by not incorporating the expansion of cropland on to CRP, LCA overestimates emissions savings by a similar percentage (approximately 27%). Finally, we find that the assumption in most LCA analyses, that the use of ethanol has no impact on international crude oil or land markets, will cause LCA to overestimate emissions savings relative to the general equilibrium estimates by more than 285% and 3000% respectively.