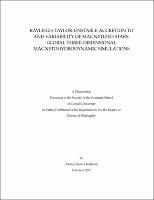 We present results of three-dimensional (3D) simulations of magnetohydrodynamic (MHD) instabilities at the accretion disk-magnetosphere boundary in accreting magnetized stars. The instability is Rayleigh-Taylor, and develops for a fairly broad range of accretion rates and stellar rotation rates and magnetic ﬁelds. It manifests itself in the form of tall, thin tongues of plasma that penetrate the magnetosphere in the equatorial plane, instead of ﬂowing around the magnetosphere as in the canonical accretion picture. The shape and number of the tongues changes with time on the inner-disk dynamical timescale. In contrast with funnel ﬂows, which deposit matter mainly in the polar region, the tongues deposit matter much closer to the stellar equator. The instability appears for relatively small misalignment angles, Θ 30◦ , between the star’s rotation and magnetic axes, and is associated with relatively high accretion rates. We then calculate the photometric variability due to emission from the hot spots that the accreting matter produces on the stellar surface. For neutron stars, we take relativistic effects into account in calculating the observed energy ﬂux. Our goal is to compare the features of the lightcurve during stable and unstable accretion, and to look for possible quasi-periodic oscillations (QPOs), which produce broad peaks in the Fourier power spectra of these objects. The lightcurves during stable accretion show periodicity at the star’s frequency and sometimes twice that, due to the presence of two funnel streams that produce antipodal hotspots near the magnetic poles. On the other hand, lightcurves during unstable accretion are more chaotic due to the stochastic behaviour of the tongues, and produce noisier power spectra. However, the power spectra do show some signs of quasi-periodic variability. Most importantly, the rotation frequency of the tongues and the resulting hotspots is close to the inner-disk orbital frequency, except in the most strongly unstable cases. There is therefore a high probability of observing QPOs at that frequency in longer simulations. In addition, the lightcurves in the unstable regime show periodicity at the star’s rotation frequency in many of the cases investigated here, again except in the most strongly unstable cases which lack funnel ﬂows and the resulting antipodal hotspots. The noisier power spectra result in the fractional rms amplitudes of the Fourier peaks being smaller. Another interesting regime we investigate is the “Magnetic Boundary Layer” regime, which occurs at small magnetospheric sizes. Unstable cases in this regime show instability tongues that behave much more coherently; two diametrically opposite tongues form and rotate synchronously at approximately the angular velocity of the inner disk. The resulting hot spots produce highfrequency QPOs. There is a deﬁnite correlation between the inner disk radius and the QPO frequency: the frequency is higher when the magnetosphere is smaller. When the magnetosphere is negligibly small, the disk interacts with the star through an equatorial belt. We also show that variation of the accretion rate leads to drift of the QPO peak.