Quantification And Formalization Of Security 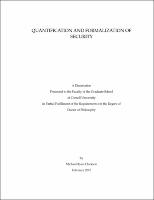