Atomic Transition-Based Precision And Accuracy In Micro- And Nanoscale Systems 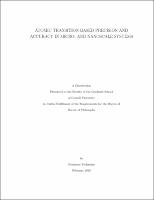 This thesis describes work on using atomic transition-based stabilization to yield high precision, high stability systems for micro- and nano-scale systems. After discussing the fundamentals of atomic precision and control loops, compact low power radio frequency plasmas are described for use in passive rubidium atomic clocks. A self-powered implementation is then described, using a radioactive isotope as the power source. Next, an atomic beat clock is described as a low power atomic frequency source. The ultimate precision in laser frequency stability due to quantum phase ﬂuctuations is discussed. Next, a nanometrology optical ruler imaging system is described which uses an atomically frequency-stabilized laser. Simulations and experimental results are described. Finally, scanning probe nanofabrication of highly ordered pyrolytic graphite using an electrochemical etching process is described, where a feedback control system allows for fabrication of a large array.