Carnegie Report, The Serbian Army during the Second Balkan War, 1913 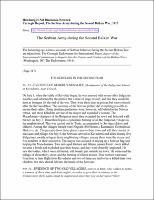 Report including eyewitness testimonies relating to the conduct of the Serbian Army during the Second Balkan War (atrocities against Bulgarians and others). Also deals with atrocities committed by and against other belligerents and villagers (Greeks, Bulgarians, Turks).

The Carnegie Endowment for International Peace, Report of the International Commission to Inquire into the Causes and Conduct of the Balkan Wars (Washington, DC: The Endowment, 1914).