The Salience of Small: Nanotechnology Coverage in the American Press, 1986-2004 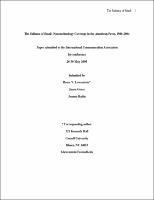