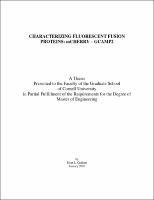 The work presented here is focused on the characterization of the fusion protein created by genetically linking the two fluorescent proteins, mCherry and GCaMP2. This protein was cloned into the pRSET bacterial expression vector for expression in Escherichia coli cells in which the protein was amplified and subsequently extracted for experimentation. Four different mutations of GCaMP2, as well as an undisturbed GCaMP2 sequence, were paired separately with a previously optimized mCherry sequence for testing. The fluorescent activity of each of the five proteins was tested in the presence of calcium ions (Ca2+) to determine a calibration curve of calcium concentration versus fluorescence intensity. This measurement and analysis was also conducted in the presence of interfering magnesium ions (Mg2+) and at varying pHs to determine the effects of these different environments on the fluorescent activity of the protein. Mutations exhibited a sigmoid – like response with the increase of [Ca2+], and magnesium ions caused distortion of this sigmoid – like signal. Substitution of the M13 calmodulin (CaM) binding moiety with CaMKII CaM binding moiety resulted in loss of the sigmoid – like signal but showed an increased dynamic range. The proteins showed a functional pH range between ~6.5 and ~11.5.