Biotechnology and the American Media: The Policy Process and the Elite Press, 1970-1999 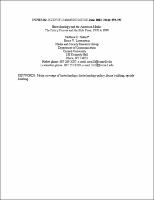 In this paper, we present a quantitative content analysis of biotechnology-related coverage appearing in the New York Times and Newsweek between the years 1970 to 1999, examining patterns of media attention and evaluating the source impact of various political and social actors on the themes, frames, and tone of coverage. Although media attention to biotechnology steadily increased across the 1980s and for most of the 1990s, media attention within years has been highly episodic, peaking and plummeting in response to major scientific announcements or related focusing events. Even in its peak years of coverage, biotechnology still rests rather modestly on the overall media agenda in comparison to other major political issues, and in comparison to other issues related to science, technology, or popular culture. The character of biotechnology-related coverage has been overwhelmingly positive, and has been dominated by scientists, government actors, and industry, with a heavy emphasis on the frames of scientific progress and economic prospect. A departure from this trend only occurs in correspondence to the late 1990s debate over cloning, as a greater media emphasis on ethics and controversy emerges.