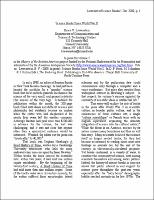 In the United States after World War II, new research findings were not considered “science” until they appeared in refereed journals. Yet books remained (and remain) tremendously important in American science. They provided structure and substance for scientific communities -- both communities within scientific practice and communities of scientific interest that extended beyond the professional scientific world, communities that encompassed various publics and defined their interaction with science. Science books can be understood as shared social experiences, ones that through their use created a common bond that may or may not have been based on the actual content of the text. Books served multiple communities, crossing boundaries in complex ways that allow us to see trust and authority in action. Books served as social memories, providing cultural touchpoints that allowed communities to express their common norms and interests. To explore these issues, this chapter looks at books in several categories: books of daily use such as reference books, textbooks, those with clear influence on intellectual culture, and those with clear influence on broader public culture or "culture scientifique" – the place of science and scientific ideas in the cultural matrix. The chapter looks at how scientific ideas were presented and conveyed through books in the post-WWII era to create intellectual regimes, as well as how they were used in discourses that both contributed to science's social authority and simultaneously allowed ideas to shift meanings as they were used in different contexts.