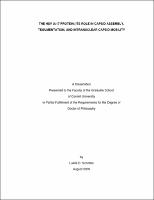 Employing a novel anti-pUL17 antibody I have resolved details of the physical relationship between the minor capsid protein, pUL17, and the herpes simplex virus (HSV-1) capsid and tegument layers. I helped demonstrate that pUL17 binds externally and multivalently to the capsid, fulfilling a structural role and potentially explaining its function in DNA encapsidation as well. Immunoprecipitation assays illustrated interactions of pUL17 with capsid proteins VP5 and pUL25 as well as tegument proteins VP11/12 and VP13/14. A pUL17/ pUL25 capsid-independent complex was detected upon capsid-deficient infection. In wild-type infection, this complex could also be detected independently of capsid. Immunofluorescence studies revealed pUL17 and pUL25 co-localization in wild-type infection; moreover, proper localization was co-dependent. While pUL25-deficient infection yielded a unique mis-localization of pUL17, the mis-localization phenotype of pUL25 in the absence of pUL17 resembled pUL25 mis-localization without VP23 and VP5. Deletion of capsid proteins but not all DNA cleavage and packaging proteins increased cytoplasmic concentrations of pUL25 and pUL17 though overall protein levels appeared depressed in immunostaining. This observation coupled with poor pUL25 immunoprecipitation from these mutant viruses, suggests that pUL25/pUL17 may undergo conformational changes. Also, cytoplasmic localization of pUL25 seems to occur at least in part through Crm-1 nuclear export machinery. Additional immunoprecipitation studies revealed interactions with VP11/12 and VP13/14. pUL17 was in turn immunoprecipitated with antiVP13/14 antibody. Nickel matrix purification of pUL17 from a pUL17 C-terminal His-tagged virus also enhanced VP13/14 co-elution independently of VP16. A VP13/14 and pUL17 immunofluorescence time course demonstrated colocalization in the replication compartment, cytoplasm, and both nuclear and plasma membranes. VP11/12 may mediate cytoplasmic VP13/14-pUL17 interaction. Upon transfection VP13/14 and pUL17 were found to co-localize in cytoplasmic puncta only when VP11/12 was expressed. I also probed for functional roles of pUL17 including intranuclear capsid transport, DNA-binding, and ATP hydrolysis. All essential encapsidation proteins, including pUL17 were assayed by time-lapse microscopy for effects on intranuclear motility of GFP-VP26-labeled capsids. No single protein was concluded to deter capsid dynamics, indicating intranuclear capsid movement does not reflect encapsidation and does not require encapsidation proteins. Additionally, pUL17 was found to bind to pac-1-containing DNA and may have ATPase activity.