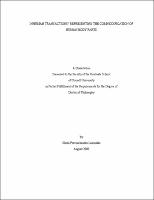 This dissertation explores the commodification of the human body that emerges from the relationship between late capitalism and biomedical advances in transplant technology. A closer look at the circuits of organ trade shows that the trafficking of human organs perpetuates the structures of economic exploitation that characterised colonialism in its heyday: organs travel from formerly colonized nations to former metropoles, from black/brown bodies to white ones, from poor to rich. In the wake of biotechnology, I argue, the commodification of the human body is taking on new, predatory forms that can only be understood in the context of (de)colonization, globalization and late capitalism. I begin by examining organ commodification in relation to Karl Marx's theorisation of the commodification of labour-power, and then proceed to examine organ harvesting, transplanting and trafficking as represented in three contemporary texts: Manjula Padmanabhan's play Harvest (1996), Stephen Frears's film Dirty Pretty Things (2003) and Kazuo Ishiguro's novel Never Let Me Go (2005). These texts grapple with contemporary debates around organ harvesting and stage the new ethical dilemmas to which the use and abuse of transplant technologies gives rise. They engage with this newly materialised way of commoditising the body in a way that allows us to think about organ exchange, not as a transaction forever trapped between the dynamic of altruistic donation and commoditised exchange, but as a site from which to examine the fraught relationship that exists between organ donors/sellers and organ receivers/buyers. A comparison of all three works reveals the need to understand transplant technologies and the commoditization of the human body that they permit as inextricable from the empowering yet disturbingly predatory effects that biotechnologies have on our understanding of death, where death is increasingly imagined as a fate that technology can endlessly keep at bay. Drawing attention to themselves as literary works, these texts dare to imagine and interrogate the future that biotechnology both promises and threatens us with. In my literary-critical readings, I make a claim for literature's ability to stand as a constant counterpoint to the instrumental logic that characterises organ commodification, signalling instead, to a space beyond such instrumentality.