Mechanistic Studies On Tryptophan 2,3-Dioxygenase, And Characterization Of Genes Involved In Vitamin B6 And Pyrimidine Catabolism 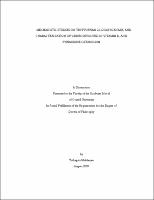 Tryptophan 2,3-dioxygenase catalyzes the first and the rate limiting step in the kynurenine pathway of tryptophan degradation to form N-formyl kynurenine. Mechanistic and kinetic studies were done on this enzyme and the results were shown to favor the Criegee rearrangement as the most likely pathway for the catalytic transformation. There are two characterized catabolic routes for vitamin B6 degradation. Even though the enzymes involved in the degradation of vitamin B6 have been characterized, no information on the genes encoding for these enzymes were available for a long time. Recently, 4 out of the 7 genes involved in Vitamin B6 catabolism were identified from Mesorhizobium loti, while the other 3 genes remained elusive. Bioinformatics search revealed three candidates which could function as an oxidoreductase (mlr6793), a decarboxylase (mlr6791) and a hydrolase (mlr6787). These were cloned and heterologusly overexpressed in Escherichia coli. Each protein was purified to homogeneity and in vitro biochemical studies were carried out to rigorously characterize mlr6793, mlr6791 and mlr6787 gene-products to be 4-pyridoxic acid dehydrogenase, 3-hydroxy-2- methylpyridine-4,5-dicarboxylate decarboxylase and 2-(acetamidomethylene)succinate hydrolase respectively. Apart from the well known reductive and oxidative catabolic pathway of uracil (or thymine) another novel pyrimidine degradation pathway was very recently discovered in Escherichia coli K12. The genes participating in this pathway were identified but no information on the enzymology and intermediates involved in this pathway were known. Our work characterized the intermediates of the pathway and identified three enzymes in this novel pathway that were able to convert uracil to 3-oxopropionate. The first enzyme in this pathway is RutA which does a novel flavin dependant hydrolysis of uracil. With the crystal structure of this protein and model chemistry we were able to hypothesize a plausible mechanism for the reaction catalyzed by RutA.