Essays On The Economics Of Immigration, Immigrant, And Education Public Policies 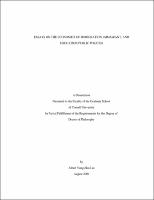 This dissertation examines three topics at the intersection of the economics of immigration and the economics of education. First, I study the development of human capital among immigrants by evaluating Arizona Proposition 203 (2000) and Massachusetts Question 2 (2002), which require public school districts to provide one year of Structured English Immersion to English language learner students. Using a difference-in-differences framework, I show that for recent-arrival first-generation immigrants, the two initiatives are less effective at developing English language proficiency than previous programs, such as Transitional Bilingual Education and English as a Second Language. However, I also show new heterogeneity in relative program effectiveness in that second-generation immigrants actually benefit from Structured English Immersion. In the second chapter, I use unique data from the Current Population Survey on education by country of origin to show that the return to foreign education among immigrants is 3.3 percent. This estimate is half the size of estimates from previous studies for two reasons. First, calculating foreign education as the difference between total education and domestic education rather than as a function of total education ad age at arrival eliminates the upward bias from misattributing domestic education as foreign education. Second, excluding domestic education as an endogenous control variable removes the upward bias in the return to foreign education caused by the negative correlation between domestic education and foreign education. The results show that foreign education is even less portable to the United States labor market than previously thought. In the third chapter, I test whether country-level educational expenditures, pupil-teacher ratios, and student achievement should be interpreted as measures of foreign school quality. I use the United States Census and the American Community Survey to show that the three measures are associated with the return to foreign education in expected directions. However, only educational expenditures are robust to accounting for group-level correlations between the wage residuals. I also show that the three measures affect immigrants who never attended school in their countries of birth as a falsification test, which suggests that they reflect country-level unobservables rather than foreign school quality.