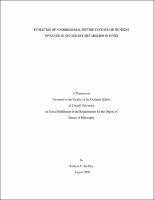 Nonribosomal peptide synthetases (NRPSs) are multimodular enzymes which biosynthesize peptides (NRPs) independently of ribosomes. Three core domains (adenylation (A), thiolation (T), condensation (C)) comprise a functional module for NRP biosynthesis. Although NRPSs produce a diversity of bioactive compounds, little is known about the evolutionary relationships of genes encoding NRPSs and the mechanisms by which they evolve. The objectives of this research were to perform phylogenomic analyses to identify major NRPS subclasses and determine evolutionary relationships and to elucidate fine-scale evolutionary mechanisms giving rise to the diverse NRPS domain structures in fungi. Chapter 2 is a published manuscript on ferrichrome synthetases tracking the evolution of domain architectures of these relatively conserved enzymes across fungi. Results supported the hypothesis that ferrichrome synthetases evolved by tandem duplication of complete modules (A-T-C) (single or double units) and loss of single A domains or complete A-T-C modules. A mechanism for evolution of iterative biosynthesis is proposed. Protein modeling of the A domain substrate binding pockets refined characterization of key residues involved in substrate specificity, by identifying novel sites. Chapter 3 reports a fungal kingdom-wide phylogenomic study of NRPSs, with the objective of identifying subclasses. Nine were identified which fell into two major groups. One consisted of primarily mono/bi-modular NRPSs with conserved domain architectures which group with bacterial NRPSs and whose products are associated with conserved metabolic roles. The other consisted of primarily multimodular and exclusively fungal NRPSs with variable domain architectures whose products perform niche-specific functions. All groups of NRPSs were much more common in Euascomycetes than in any other fungal taxonomic group. Although NRPSs are discontinuously distributed across fungal taxa, little evidence was found for horizontal gene transfer from bacteria to fungi. Overall, this study showed that both tandem duplication and loss, as well as recombination and rearrangement, of modular units (either complete A-T-C modules or single A domains) are mechanisms by which NRPSs and their chemical products evolve. Phylogenomic analysis identified subgroups of NRPSs possibly reflecting common function and suggested an older evolutionary origin of several mono/bimodular groups while multimodular fungal NRPSs are more recently derived and highly expanded in Euascomycetes.