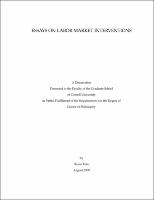 This dissertation analyzes the economic, political, and social consequences of labor market interventions by different economic actors. What happens when consumers in the developed world intervene in the labor market of the developing world through boycott campaigns? How did a Temporary Workers Protection Act mandated by the Korean government shape the relations between a temporary workers' union and a regular workers' union? Does increase in minimum wages decrease household poverty? In this dissertation, we will see that well-intended action may make the targeted individuals worse-off. We will also see that in some cases such backlashes can lead to other opportunities. The first chapter "Boycott Activism and Its Welfare Consequences" provides a theoretical framework that can be used to analyze the overall effects of product boycotts. Consumers have the power to change the behavior of the firm through boycott campaigns. Their conscientious participation, however, may actually result in a reduction in welfare of the workers if the firm decides to alter its operation by lowering the wage expecting a demand decrease or by shutting down and moving elsewhere. The analysis emphasizes the importance of information, suggesting that activists set their goals by studying the labor market and coordinating with local groups rather than demanding what may seem righteous. The second chapter "Solidarity or Competition? A Tale of Two Unions" presents a case study of a coalition of two labor unions that led the 2007 Tempo- rary Workers Movement against the government's installment of a Temporary Workers Protection Act in South Korea. One union consisted mainly of regular workers and the other mainly of temporary workers. I argue that political opportunities combined with change in objectives with the progression of negotiation shaped the processes of coalition formation and dissolution. Qualitative and quantitative variance of resources, protest style, and membership characteristics across organizations acted as an incentive for joining forces at first, but hindered a common identity from forming and ultimately led to the breaking of the coalition. The third chapter "Poverty Effects of the Minimum Wage: The Role of Household Employment Composition" (with Gary Fields and Ravi Kanbur) provides an analytical framework to study the impact of minimum wages on a class of absolute poverty measures. The effects of a minimum wage increase depend on the values of key parameters (poverty line, poverty aversion, labor demand elasticity, and the starting level of the minimum wage), which demonstrates a need for a nuanced appreciation of poverty measures. Moreover, the relationship between poverty and the minimum wage is in general non-monotonic, so that local effects may be different from the effects of large changes in the minimum wage. .