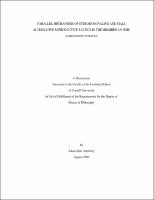 The consequences of corticosteroid activity are as diverse as they are necessary. Steroid hormones and their receptors have co-evolved to influence a multitude of physiological and behavioral parameters via discrete modifications in steroid signaling pathways. Here, I investigated the presence and relative abundance of receptors and steroidogenic enzymes in the corticosteroid (glucocorticoids and mineralocorticoids) and androgen signaling pathways during the breeding season in a teleost fish, the plainfin midshipman (Porichthys notatus), that has two male reproductive morphs with divergent reproductive tactics. Territorial (type I) males acoustically court females, whereas sneaker (type II) males do not court females but rather steal fertilizations from type I males. I first cloned and sequenced the midshipman genes for glucocorticoid (GR) and mineralocorticoid (MR) receptors and the enzymes 11-beta-hydroxysteroid dehydrogenase (beta-HSD) and beta-hydroxylase (beta-H) that are involved in corticosteroid and androgen synthesis. A prior study cloned and sequenced the midshipman androgen receptor (AR). Absolute quantitative PCR then determined the mRNA expression profiles for GR, MR, AR, beta-HSD and beta-H in each midshipman male morph. In general, type II males showed the highest mRNA expression levels for all genes throughout the central nervous system. Type I males, however, had higher mRNA levels for all genes in the vocal muscle, and for beta-HSD and beta-H in the testis. Together, the expression patterns showed that mRNA abundance for the enzymes and receptors mediating androgen and glucocorticoid signaling pathways are distinct in type I and II male midshipman fish, reflecting their equally distinct vocal, spawning and endocrine phenotypes. A separate study addressed the specificity of the ligand binding domain of corticosteroid receptors from teleost fish (including midshipman) and mammals. The results indicated that a duplicated GR in teleosts exhibited high sequence identity to the mammalian GR, but responded like the mouse MR to steroid ligands. A phylogenetic analysis then showed that the duplicated fish GR secondarily evolved after a more ancestral duplication event that led to the initial divergence of two corticosteroid receptors in vertebrates that were activated by either glucocorticoids alone (GR) or both glucocorticoids and mineralocorticoids (MR).