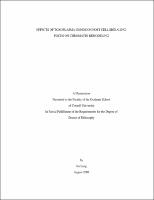 Toxoplasma gondii is an important opportunistic protozoan parasite. Macrophages infected with Toxoplasma gondii cannot upregulate many pro-inflammatory cytokines, including tumor necrosis factor (TNF-alpha), upon stimulation with LPS and other Tolllike receptor (TLR) ligands. However, LPS induction of IL-10 is not affected by the parasite. Here, we employed chromatin immunoprecipitation (ChIP) to examine TNFalpha promoter activity of infected macrophages. During LPS stimulation, Toxoplasma blocked recruitment of RNA polymerase II to the TNF-alpha promoter. In addition, binding of transcription factors NF-kappa-B, CREB and c-Jun was inhibited by infection. Analysis of chromatin structure surrounding the TNF promoter showed that LPSinduced Ser10 phosphorylation and Lys9/14 acetylation of histone H3 (modifications associated with increased transcriptional activity) were inhibited by Toxoplasma. Immunofluorescence assays revealed that global Ser10 histone H3 phosphorylation levels were also blocked by T. gondii. Low level IL-10 gene induction by LPS that was not inhibited by the parasite did not require chromatin remodeling. However, high level IL-10 production induced by the combination of LPS and immune-complex (IC) stimulation was associated with histone H3 covalent modification. Remodeling of chromatin at the IL-10 promoter induced by LPS plus IC was also inhibited by Toxoplasma. Our results argue that Toxoplasma targets chromatin remodeling to inhibit cytokine gene transcription, and as such the data reveal a new mechanism by which an intracellular pathogen incapacitates cytokine production during infection. We also performed further studies and obtained evidence that both MyD88 dependent and MyD88 independent TLR signaling were inhibited by the parasite. Strain comparison studies also showed that Type I parasite strains have the most potent inhibitory effects in interfering with host signaling.