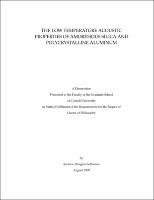 The standard tunneling model of glass invokes low energy excitations due to tunneling two level systems to explain the universal properties observed in glasses below 1 K. Our measurements of the internal friction Q exp(-1) and relative change in sound speed sigma-v/v sub(0) in amorphous SiO2 at three frequencies in the kHz range showed that the standard tunneling model is valid down to 10 mK, a much lower temperature than was previously thought. Yet below 10 mK, we observed a crossover from the prediction of the standard tunneling model to a Q exp(-1) infinity T dependence. This weaker temperature dependence is evidence for an additional two level system relaxation mechanism that dominates over phonondriven relaxation at the lowest temperatures. While the nature of the additional TLS relaxation mechanism remains a topic of theoretical debate, the most likely explanation is interactions between pairs of two level systems. We were able to fit the theory to the observed Q-1 at all three frequencies with a single additional parameter, the interaction-driven relaxation rate. A weaker than expected temperature dependence of sigma-v/v sub(0) below 3 mK is also studied, and it is shown that thermal decoupling is an unlikely explanation. Finally, glassy behavior in the acoustic properties of a polycrystalline aluminum film is discussed in the context of previous measurements on aluminum and models of dislocation-phonon interactions.