Three Essays On Urban Governance And Habitat In Developing Countries 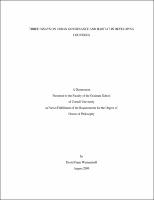 This dissertation comprises three articles that discuss various concerns affecting urban governance and urban habitat in developing countries and regions. The articles are organized in chronological order. The first, Uneasy Partnerships between City Hall and Citizens, reviews a series of case study reports commissioned by the author between 1995 and 2001 during the later part of his tenure as a research coordinator at the United Nations Research Institute for Social Development (UNRISD) in Geneva, Switzerland. The case studies characterized the forces propelling and constraints against achievements of multiple collaborations between Civil Society Organizations CSOs and local authorities in Chicago, East St. Louis, Ho Chi Minh City, Jinja, Johannesburg, Lima, Mumbai, and Sao Paulo. The periods covered by the individual studies vary, though several stretch as long as from 1990 to 2003. The second article in the collection is Self-built Housing in Developing Countries: Current Contributions and Challenges to Local Development through Volunteerism. The study drew on research stimulated by the UNRISD project and subsequent contacts with community organizations and local governments that developed and promoted innovative approaches to collective land occupation, housing construction, and management as community-building and political-awareness-raising exercises. The final essay in this collection, Security of Housing Tenure in the People's Republic of China: Background, Trends, and Issues, is an exploration of emerging housing issues in the People's Republic of China. The main concern of the article is to begin to describe how ill-conceived and poorly implemented land and housing reforms since the late 1990s have increasingly accelerated the erosion of access to secure tenure to housing for low-income groups in both the rural and urban sectors. This rapid return of insecure housing tenure has occurred during a period of massive expansion of commercial housing and house ownership in urban China. Socio-spatial segregation and income inequality are hallmarks of this process.